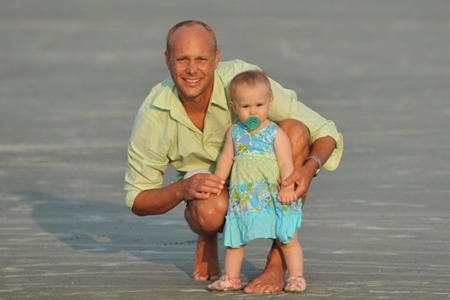 Stefan Bauroth has taught swimming for the past 30 years. He began instructing at age 16 in Long Island, NY for the Town of Huntington learn to swim program.

As his interests in the field grew, Stefan decided to further enhance his teaching skills by becoming a Red Cross certified Swim Instructor (WSI) and a certified Lifeguard in 1993. Moving his way up the ranks teaching children and adults Stefan eventually became manager of the Huntington swim program for six years from 1999-2005. Stefan also holds a Bachelors degree in Early Childhood/Elementary Education, a Masters degree in Special Education, as well as a Masters degree in School Administration. He has taught school in New York, Hawaii, and South Carolina,  for a total of 19 years.

In August of 2005 Stefan and his wife Meredith moved to Bluffton, South Carolina and noticed there was a need for swimming lessons which measured up to his expectations.  On March 6th, 2006 Island Swim became an officially licensed swim school. The idea was simple: offer high quality, individually focused lessons to all ages and levels. Since then, Island Swim has reached two more milestones by becoming a nationally recognized swim school by the United States Swim School Association (USSSA) in February of 2008 and becoming a member of the National Drowning Prevention Alliance (NDPA) in January of 2012.